There was once a fairy who was learning how to be a fairy godmother. Most magic and wonderful, she was the kindest and cleverest of all fairies. However, she was also a very ugly fairy. And no matter how much she showed her wonderful qualities, it seemed that everyone was determined to believe that the most important thing about a fairy was her beauty. In the fairy school they ignored her, and every time she flew off on a mission to help a child or anyone else in trouble, before she could say a word they were already screeching and yelling at her: “Ugly! Get out of here, weirdo!”

Despite her being little, her magic was very powerful, and more than once she had considered using it to make herself beautiful. But then she remembered what her mother had always told her: “My dear, you are what you are, warts and all; and never doubt that you are this way for a very special reason…”

But then, one day, the witches of the neighbouring land invaded and destroyed the country, putting all the fairies and wizards in prison. Our fairy, just before being attacked, put a spell on her own clothes and, helped by her ugly face, she was able to follow the witches back to their den.

Once there she used her magic to prepare a big party for everyone, decorating the cave with bats, toads and spiders. The music was provided by a pack of howling wolves. While the party was in full swing, the fairy hurried off and set free all the fairies and wizards who had been imprisoned. When all of them were free, they worked together on one big spell which succeeded in trapping the witches inside the mountain for the next hundred years. And for the next hundred years, and more, everyone remembered the great bravery and intelligence of the ugly fairy.

And from that day on no one in that land ever saw ugliness as a disgrace. Whenever someone ugly was born, people were filled with joy, knowing that for that new person great things lay ahead. 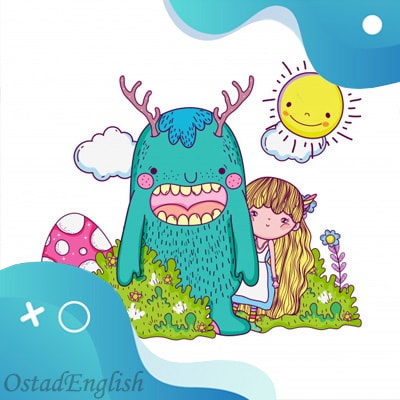