Once upon a time there was a very evil and unpleasant crook who only ever thought about how to get money. Seeing anyone happy bothered the crook enormously. What he hated most was when people were polite and courteous to each other, saying things like please and thank you, and don’t mention it. It annoyed him even more if they were smiling when they said these things.

The crook thought all those kinds of words were a useless waste, and weren’t good for anything. So what he did was spend a lot of time inventing a machine which could steal words. With this machine, he planned to steal ‘please’, ‘thank you’, ‘don’t mention it’, and similar words people used to be polite. He was convinced that no one would notice if those words were to suddenly disappear. When he had stolen these words, he intended to take them apart and sell the letters to book publishers.

After he started up his machine, people would open their mouths, intending to say kind and polite things, but nothing came out. All those words ended up inside the big machine. Just as the crook had hoped, in the beginning nothing happened. It looked like people really didn’t need to be polite after all. However, after a while, people started to feel like they were always in a bad mood, doing everything reluctantly, and feeling like everyone else was being forever
demanding of them. So, within a few days, everyone angry and arguing over the slightest little thing.

The crook was terribly happy with his success, but he didn’t count on a couple of very special little girls. Those girls were deaf, and had to communicate using sign language. Now, because the machine couldn’t steal gestures, these girls continued being kind and polite. Soon they realised what had been happening to everyone else, and they found out about the crook and his wicked plan. The girls followed him to his hideout on the top of a hill next to the sea. There they found the enormous machine busy separating all the words into letters. The crook had gone to take a nap, so the girls crept up to the machine and started being polite and courteous to each other.

Try as it might, the contraption couldn’t steal those words, and it started to suffer a power overload, which got more and more serious as the girls went on communicating. Finally, it exploded, sending all the letters it had gathered flying into the sky. These letters started coming down, like rain, and most ended up in the sea. After that, everyone could be polite and thoughtful again. The anger and the arguments stopped, proving that good manners are very useful for keeping people together in a spirit of happiness.

Seeing all those letters fall into the sea gave those two little girls an idea. A little while later they opened a factory. Making alphabetti spaghetti soup! 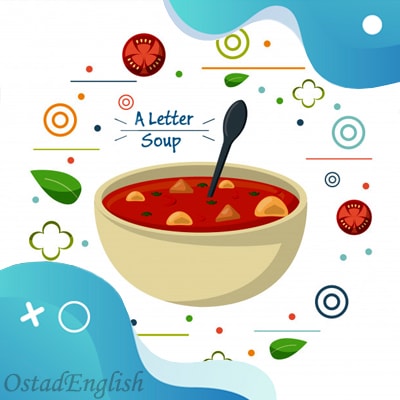