There were once two doors in the same house. One was a beautiful living-room door, and the other was just an ordinary bathroom door.What they had in common was that both let awful lives. The house was full of naughty children who are always slamming and kitching the doors. Each night when everyone was asleep, the doors would talk about their miserable fortune. The living-room door was always sick and tired, ready  to explode with anger, but the bathroom door would calm him down, saying:” don’t worry, it’s normal. They’re children, they’ll soon  learn. Put up with it a little longer and you’ll see that things will improve.”

And so the living-room door would calm down for a while. But one day after, a big party and innumerable slamming and Kitching of the doors, the living-room door finally lost it, saying, “OK. that’s enough! the next time someone slams me I’m going to break and they’ll learn a thing or two.”

This time, he did not listen to the bathroom door, and the next day, the first time he was slammed the living-room door broke. This caused a great rumpus in the house, and the children were warned to be more careful . This filled the living-room door with satisfacation. Finally he was tasting Sweet revenge. However after the first few days of this, the owners of the house got tired of the inconvenience of having a broken door. Instead of mending the door, they decided to replace it. The old door was removed and thrown outside, next to the rubbish.

There lay the beautiful living-room door regretting what it had done. For not being able to put up with things for just a little longer, it now found itself discarded, waiting to be turned into sawdust. Meanwhile, his friend, the ordinary bathroom door, remained in its place, and the children were treating it with greater care …

Fortunately, the living-room door did not end up as sawdust. Instead, a very poor man found him amongst the rubbish, and although the door was broken, the man knew that this door was the best he would be able to find for his poor house. The door in turn, was happy to have the chance to be proper door again and to graciously accept the discomforts of a job has hard as being a door 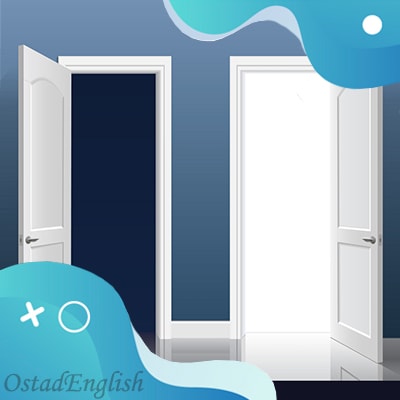