One day, a train was approaching the small town of Cheekyville. On the train was a strange guy with a big suitcase. He was called William Warbler – the man, not the suitcase – and he looked very common indeed. What made him most unusual, though, was the fact that whenever he needed to communicate he did it by singing opera. It didn’t matter to William whether it was simply a matter of answering a brief greeting, like ‘good day’. He would clear his voice and respond,

It wouldn’t be unfair to say that almost everyone considered William Warbler a massive pain in the neck. No one could get a normal, spoken, word out of him. And, as no one knew how he made his living – and he lived quite simply, always wearing his same old second-hand suit – they often treated him with disdain.

They made fun of his singing, calling him ‘Don No One’, ‘Poor-Rotti’, and ‘Lazy Miserables’. William had been in Cheekyville for some years, when, one day, a rumour spread round town like wildfire: William had secured a role in a very important opera in the nation’s capital, and there were posters cverywhere advertising the event. Everyone in the capital went to see it, and it was a great success. At the end of its run – to everyone in Cheekyville’s surprise – when William was being interviewed by reporters, he answered their questions by speaking rather than singing. And he did it with great courtesy, and with a clears and pleasant voice.

From that day, William gave up singing at all hours. Now he did it only during his stage appearances and world tours. Some people suspected why he had changed, but others still had no idea, and continued believing him to be somewhat mad. They wouldn’t have thought so if they had seen what William kept in his big suitcase. It was a large stone, with a hand-carved message on it.

The message said: “Practice, my boy. Practice every second, for you never know when your chance will come.”

Little did people realise that he only got the role in the opera because the director had heard William singing while out buying a newspaper. 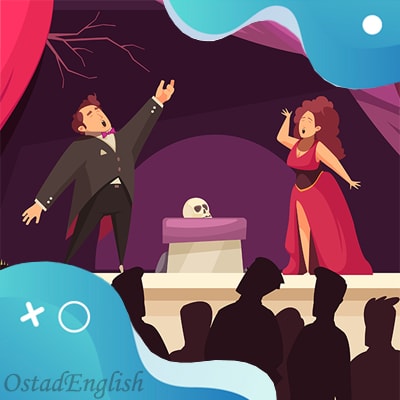