Gus Grumplings was never happy with anything. He had lots of friends, and parents who loved him dearly, but all Gus could think about was what he didn’t have, or things he did have which he was unhappy with. If someone gave him a car, it would be too big or too slow. If he went to the zoo, he’d come back disappointed because they hadn’t let him feed the lions. If he played football with his friends, he would complain, saying there were too many of them for just one ball…

What caught Gus unaware was the prankster cloud. One day, cloud was drifting past, and heard all of Gus’s complaining. The cloud wafted over to see. When the cloud was right above Gus, he started dropping heavy black rain on him. That was cloud ‘ favourite trick to play on grumpy little kids.

Gus wasn’t at all impressed by this new development; it just made him complain even more. He was even angrier after he realised that the cloud was following him. Well, this carried on for almost a week. Gus couldn’t get away from the cloud, and he got more and more infuriated.

Gus had a little friend, a happy and generous girl called Gladys. Gladys was the only one who had been willing to hang around with Gus during all those black, rainy days. All the other children had run off to avoid getting soaked and ending up completely black.

One day, when Gus was at the end of his angry, she said to him: “Cheer up! What you should realise is that you’re the only one of us who has his very own cloud, and even better its rain is black! We could play some fun games with a cloud like this, don’t you reckon?” As Gladys was his only company these days, and he didn’t want her to leave as the others had, Gus reluctantly agreed.

Gladys took him to the swimming pool, and left him there until all the pool water was black. Then she went and got other kids. They came and played in the pool. The water being black meant they could play hide and seek! Grudgingly, Gus had to admit it had been a lot of fun, but what was even more fun was playing Wet the Cat.

Gus would find cats and run alongside them. When the cats felt themselves getting wet they would jump about in the craziest way, and run off at top speed, with funny looks on their faces. Before long, all the children in town had gathered around Gus, thinking up new games they could play using the cloud.

For the first time ever, Gus started to see the positive side of things; even things which, at first, had seemed so bad. The cloud, thought that he could now leave; his work had been done. But, before leaving, he gave Gus two days of multicoloured rain, with which the children invented the most fun games ever.

When the cloud finally left, Gus didn’t complain. Now he knew to focus on the good in life, and the good thing about cloud’ departure was that no longer was Gus soaking wet all day. Now he could go and do dry things, and that’s exactly what he did. 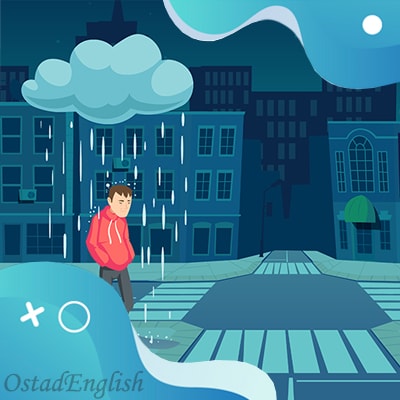