Once, on the African plains, there lived a moody rhino who was very easily angered. One day, a giant turtle entered the rhino’s territory unaware. The rhino quickly ran over the turtle, with the intention of getting rid of it. The turtle was frightened and withdrew into its shell.

When the rhino demanded that the turtle get out of his territory, there was no discernible movement. The rhino was incredibly annoyed; he thought the turtle was fooling him. So he started banging the shell to make the turtle come out.

No success, and his blows got increasingly violent. He whacked it with his horn, sending the poor turtle flying in all directions. From a distance, it looked a bit like a solitary game of football, with the turtle as the ball.

Quite an amusing spectacle, it was, and a load of monkeys soon gathered close by to enjoy it. They laughed non-stop at the angry rhino and his struggle with the turtle. The rhino was so furious that he didn’t even notice that they were there. On he went, until he had to stop for a second to get his breath.

Now that he wasn’t bashing the shell, he could hear the laughing and joking of the monkeys, who were making fun of him in every way you can imagine.

Neither the rhino, nor the turtle – who had appeared from his shell -, enjoyed the fact that a gang of monkeys was mocking them.

So, they exchanged a knowing look, nodded, and the turtle went back inside his shell. This time the rhino very quietly retreated a few steps, looked at the turtle, looked at the monkeys, took a run up, and shot the giant turtle, with such a good aim, that it seemed like he was using the monkeys as skittles.

The ‘strike’ against the monkeys turned that place into something of a casualty ward for baboons. There they all lay, covered in cuts and bruises, and not even a smirk crossed their lips. Meanwhile, off went the rhino and the turtle, smiling like old friends… and while the monkeys were putting on their sticking plasters, their chief realised it was about time they found a better way to amuse themselves than making fun of others. 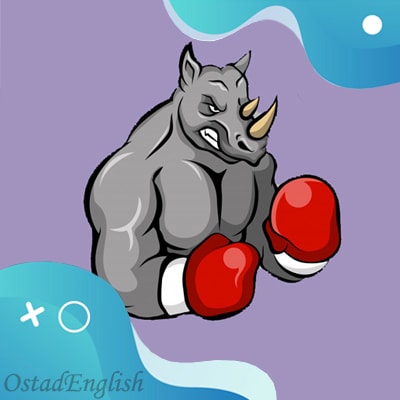