Corky was a brave young man, an expert swordsman, and he dreamed of becoming the best fighter in the world. me whole army there wasn’t a single soldier who could beat him. He hoped to become head of the army one day, so he could replace the cowardly old General who was currently in charge. The King liked Corky, but when Corky told him about his ambition to be appointed, the King looked a bit shocked and said,
“Your desire is sincere, but I’m afraid it can’t happen right now. You still have much to learn.”

That was the worst thing that could have happened to Corky, who became so furious that he stormed out of the palace, determined to learn all there was to know about fighting wars. He went to all kinds of schools and colleges, improving his technique and his strength, but without really learning any new secrets, until one day he went to a very special school, a huge grey fortress on top of a great mountain. He had heard it was the best military school in the world, and only very few students were allowed to train there. On his way he learnt that the old General had studied there, and Corky proceeded, ever more determined to be accepted into the school to learn the great secrets of war. Before entering the fortress, he was made to hand in all his
weapons.

“You won’t be needing those any more. Here you’ll getting better ones”, said the guard. Corky was impresor and he handed his weapons to a little grey man who immediately threw them into a pit. One of the instructors serious old man of few words, accompanied Corky to his room.

As he left, the old man said, “In a hundred days the training will start.” A hundred days! At first Corky thought this was a joke, but he soon realised the man had been serious. The first days were filled with nervous tension, and Corky tried all manner of silly tactics to try to get them to start the training. It didn’t work, though, and he ended up waiting patiently, enjoying each day as it was.

On the hundred and first day the first lesson began. “You have already learned how to use your main weapon: patience”, began the wise old teacher. Corky had to admit the teacher was right. “Now it’s time to learn how to win every battle,” said the old man. 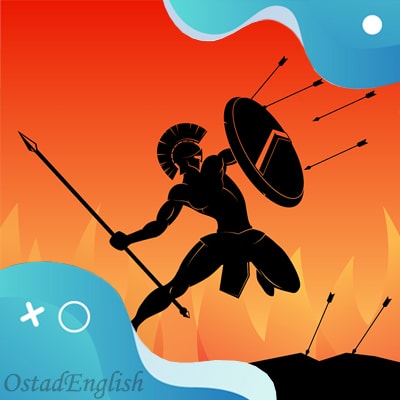