Flora was a carnivorous plant, and she lived in supermarket, next to her friend Porky the butcher’s counter Porky treated her with great affection and attention and always had some morsel of meat to give her at the end of each day. But one day, Flora didn’t get her ration of meat Nor the next day, and she got so worried that she decided to spy on Porky.

What she found out was that he wasn’t giving her anything because he was putting lots of big slabs of meat in a big yellow box, Pretending not to know anything about it, Flora asked Porky if she could have a little of the food kept in the yellow box. He responded very severely that she could not, and added,
“Don’t even think about it, Flora! Don’t ever think about touching the meat in that box”.

The plant felt hurt, as well as hungry, and she couldn’t stop wondering who Porky was keeping all that deliciouslooking meat for. With her negative thoughts she was filling up with anger, That very night, when the shop was empty, she went over to the box, opened it, and ate that meat until her belly ached….

The next morning, when Porky arrived and discovered the theft, Flora felt terrible. He asked her several times whether she had taken the meat. At first she denied it, but seeing Porky’s worry and nerves she decided to confess.

What have you done? You reckless thing!” Porky exploded, “I told you not to touch it! All that meat was poisoned!! That’s why I haven’t been able to give you anything for days. They sent us a spoiled delivery…”

Without delay, they found a Pharmabotanovet, with a Greenhouse-hospital, who managed to save Flora’s life. She was already feeling great pain in her roots, and her leaves were changing colour. The shock hit everyone hard, but at least Flora learnt to stick to the rules set by those who most love us. That’s much safer than just doing whatever you want. 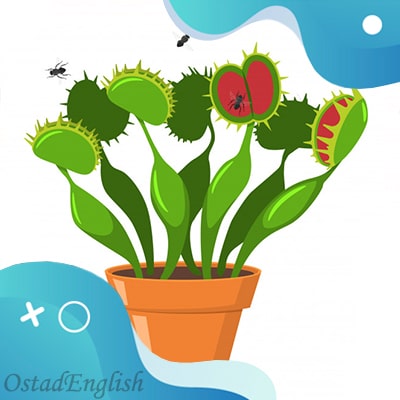