Once upon a time there was a river. This river was rather unfriendly and lonesome. The river could not remember how long ago he had decided that he no longer wanted to put up with anything or anyone. He lived alone, refusing to share his water with any fish, plant or animal.

And so his life went on, sadly and filled with loneliness, for many centuries.

One day, a little girl with a goldfish bowl came to the bank of this river. In the bowl lived Scamp, her favourite little fish. The girl was about to move to another country, and she wouldn’t be able to take Scamp with her. So she had decided to give Scamp his freedom.

When Scamp fell into the river, he immediately felt the river’s loneliness. Scamp tried talking to the river, but the river told Scamp to go away. Now, Scamp was a very happy little fish, and he wasn’t going to give up so easily. He asked and asked, swam and swam, and finally he started jumping in and out of the water.

The river, feeling all the jumping and splashing, started to laugh. It tickled!

After a while, this put the river in such a good mood that he started talking to Scamp. Almost without knowing it, by the end of that day, Scamp and the river had become very good friends.

The river spent that night thinking about how much fun it was to have friends, and how much he had missed by not having them. He asked himself why he had never had them. but he couldn’t remember.

The next morning, Scamp woke the river with a few playful splashes… and that was when the river remembered why he had decided to be such an unfriendly river:

He remembered that he was very ticklish, and that he wouldn’t have been able to stand it! Now he remembered perfectly how he had told everyone to scoot, that he wasn’t going to put up with all that tickling.

But, remembering how sad and lonely he had felt for so many years, the river realised that although it may sometimes be a bit inconvenient or uncomfortable, it was always better to have friends and to try to be happy. 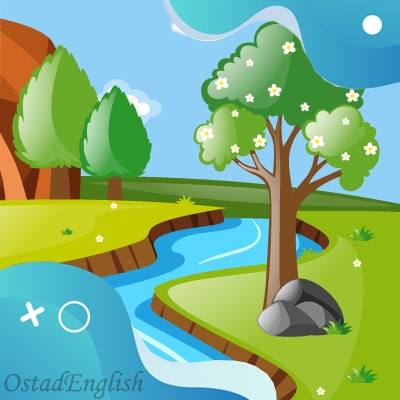