There was once and incredibly rich, beautiful, and wise Princess. Tired of false suitors who were only interested in her money, she announced that she would only marry whoever managed to present her with the most valuable, tender, and sincere gift of all.

The palace filled up with flowers and gifts of every kind, letters describing undying love, and love-struck poems. Among all these wonderful gifts, she found a pebble, a simple dirty pebble. Intrigued, she demanded to see whoever it was who had offered this gift. Despite her curiosity, she pretended to be highly offended by the gift when the young man was brought before her. He explained it to her like this, “Dear Princess, this pebble represents the most valuable thing one can give – it is my heart. It is also sincere, because it is not yet yours, and it is as hard as a stone. Only when it fills with love will it soften and be more tender than any other.”

The young man quietly left, leaving the Princess surprised and captivated. She fell so in love that she took the little pebble with her wherever she went, and for months she regaled the young man with gifts and attention. But his heart remained as hard as the stone in her hands. Losing hope, she ended up throwing the pebble into a fire. In the heat of the fire, the sand crumbled from around it, and from out of that rough stone a beautiful golden figure emerged. With this, the Princess understood that she herself would have to be like the fire, and go about separating what is useless from what is truly important.

During the following months she set about changing the kingdom, and devoted her life, her wisdom, and her richest separating what is truly valuable from what is unimportant She gave up the luxury, the jewels, the excess; and it meant that everyone in the kingdom now had food to eat and books to read. So many people came away from their interaction with the Princess enchanted by her character and her charisma. Her mere presence transmitted such human warmth that they started to call her ‘The Princess of Fire’.

And as with the pebble, the fire of her presence melted the hardness of the young man’s heart. And just as he had promised, he became so tender and considerate that he made the Princess happy till the end of her days. 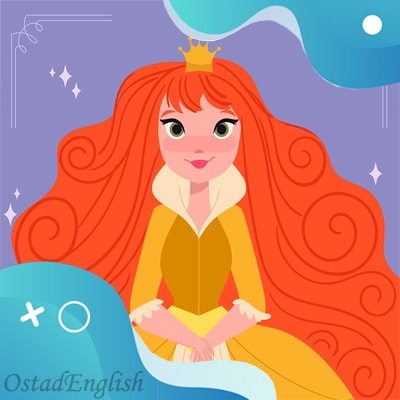 the most valuable thing

character and her charisma

the fire of her presence