The first time Luca heard talk of the Island Of Inventions. he was still very young, but the wonders he heard about sounded so incredible to him that they were forever engraved in his memory. Ever since he was a little boy, he never stopped searching for clues to investigate. Clues which might lead him to that place of wonder. He read hundreds of adventure books, histories, volumes of physics and chemistry, even music.

Taking a little from here, a little from there, he arrived at quite a clear idea of what the Island Of Inventions was really like. It was a secret place, where all the great wise men of the world would meet to learn and invent together. Access to the island was totally restricted. To be able to join that select club, you had to have created some great invention for humanity. Only then could you receive the unique and special invitation – which came with instructions on how to get to the island.

To be in with a chance, Luca spent the years of his youth studying and inventing. Every new idea he got, he made !! into an invention, and if there were ever anything he didnt understand, he would seek out someone who could help the Soon he met other young pcoplc, brilliant inventors too, an he told them of the secrets and marvels of the Island Inventions. These follow young inventors would likewise dream of being sent ‘the letter’, which is how the invitation was referred to.

As time passed, the disappointment of not being sent the letter gave rise to even greater collaboration and mutual help between the young inventors. Their interesting individual inventions were put together, creating some incredible contraptions. They met in Luca’s house, which ended up looking like a huge warehouse for machines and spare parts. Their inventions became known throughout the world, and managed to improve every aspect of life.

But even after all that, no invitation came.

They did not lose heart. They continued learning and inventing every day, trying to come up with more and better ¡ ideas. Fresh young talent was added to their group, as more and more inventors dreamed of getting to the island. One day, a long time later, Luca, already very old, was speaking with a brilliant young man who had written to him to try to join the group. Luca told the young man the great secret of the Island Of Inventions, and of how he was sure that some day they would receive an invitation. Surprised, the young inventor interrupted Luca:

“What? You mean this isn’t really the Island of Inventions? Isn’t the letter you sent me the real invitation?”

And, as old as he was, Luca looked around him, and realised that his dream had become true in his very own house. He realised that no island could exist which would be better than where he was now. No place of invention would be better than what he and his friends had created. Luca felt happy to know that he had always been on the island, and that his life of invention and study had been a truly happy one. 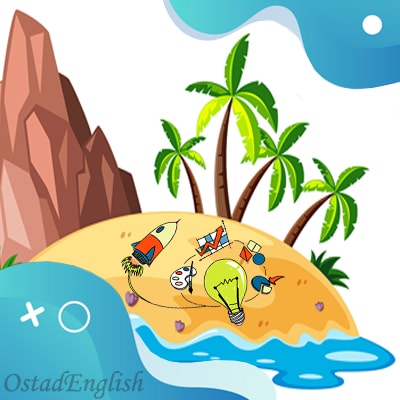