Once upon a time lived on a cloud that was grown up over a very beautiful country. One day, she saw another much bigger cloud and she felt so much envy, than the cloud decided that in order to get bigger and grow more, her water would never abandon her, and will never start raining again.

Indeed, the cloud grew up, while his country was getting dried. First, rivers dried up, then people, animals, plants, and finally, the whole country became a desert. The cloud did not care much, but she also did not realize that by being over a desert there was no place where she could obtain new water to keep growing. So slowly, the cloud began to lose size, and was unable to do anything to stop it.

The cloud then realized her mistake, and that her greed and selfishness were the cause of her vanishing; but just before evaporating, when she was just a sigh of cotton, there started blowing a gentle breeze. The cloud was so small and weighed so little that the wind took her far away, to a faraway beautiful country, where once again she recovered her original size.

Having learned this lesson, our cloud remained small and modest, but she became so generous when raining, that her new country became even greener, giving away to all people there the most beautiful rainbow in the world. 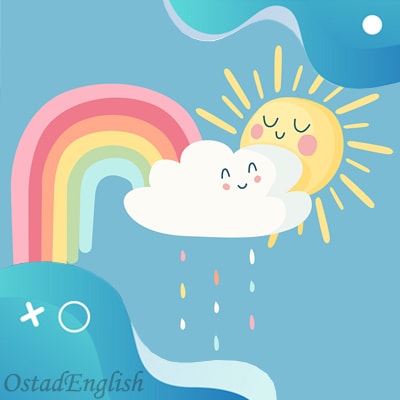